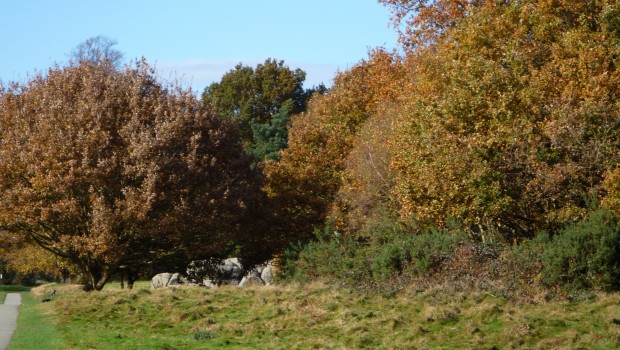 We are almost finished with the autumn work schedule now; there are still some areas on both Commons to be flailed but we have achieved quite a lot over the past month. The old pond beside the Tarry Path on Rusthall Common has been de-silted and re-puddled and hopefully it should now be able to provide a reliable spawning pond for amphibians and a home for many more invertebrates. Like most of our ponds, it is still likely to dry out in mid Summer but that makes it a more attractive breeding site to our amphibians since there will be no fish in it to eat their spawn and tadpoles.

Over towards Common View we have installed the culverts to allow water to pass under the new path and reach the two ponds near Rusthall Rd. We have also created a couple of shallow new ponds within the woodland there. Also on Rusthall, we have finally ground the tree stumps and cleared the edge of Rusthall Rd where we pushed back the woodland edge earlier this year.

Over on Tunbridge Wells Common, we have pushed back the edges of Hungershall Park in the same way and have been able to repair the Common’s verges on Castle and Bishops Down roads where they had been so badly damaged by commuter parking.

Both Wellington Rocks and Edgcumbe Rocks have been cleared of much of the bramble and scrub that was invading them and we have installed more posts around the Lower Cricket Ground as part of our attempts to prevent any further traveller incursions onto the Commons, such as we saw on the Bumps earlier this year.

Whilst we had the machine on site working on the ponds, we also used it to fill in the two sink holes that appeared last Winter and to bury the logs and stumps left below the Royal Victoria Grove after the clearance there, to create a new refuge for over-wintering reptiles and amphibians.

One of the other tasks we undertook this month was to straighten up the wooden posts around the car park on Fir Tree Rd. These posts are fairly substantial; six inch square and buried two foot into the ground and set in concrete, and interspersed amongst them are a number of railway sleepers set upright. In spite of this, most of them were leaning at a drunken angle where cars had reversed into them; people seem to use them as parking sensors. I imagine that it has caused a fair bit of damage to the cars as well. It was a time consuming and quite expensive task which is already beginning to seem pointless, as two weeks after finishing the work quite a number of posts are leaning at forty five degrees again!