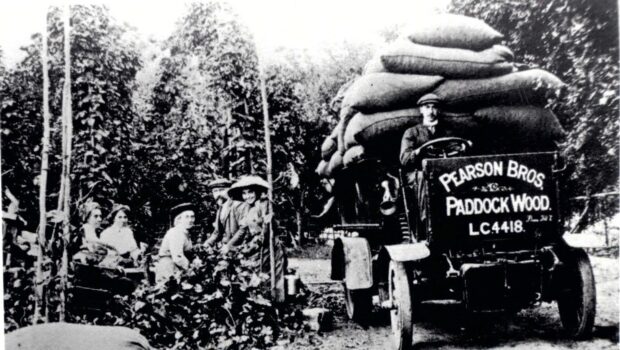 Hopping down in Kent

Hops are a fundamental part of Paddock Wood’s history. They have been grown commercially in Kent since the 16th century although the plant itself is thought to have been introduced by the Romans. Originally most of the pickers came from the local area or were itinerant workers.

As demand for the beer grew, hops, being the crucial ingredient meant of more workers were required.  In addition to domestic supply, some beer went to Chatham dockyard for the navy and some was exported.

In 1844 the first section of the Medway Valley railway line, running between Paddock Wood and Maidstone was completed.  Its main purpose was to transport hops and fruit.

At harvest time, trains specifically ran to bring hop pickers down from London’s East End.  Not that the visitors were always particularly welcomed by the local population.  In anticipation of their arrival, iron grills would be set up in the windows of some local shops. Pubs would sometimes segregate them.

Growing hops is not without its challenges. Amongst other things, mildews and red spider mites were blights that hop growers had to contend with.

Families of pickers regarded this as their holiday in the countryside. It created happy memories so that later, many who had worked in the hop gardens as children moved to Kent as adults. Many pickers, particularly those coming in their own vehicles, brought furniture and cooking utensils with them.  Accommodation was in primitive wooden or brick hopper huts which skirted the hop gardens. There were often outside brick ovens and spits to cook on. Picking could go on from dawn to dusk. The boredom was counter balanced by the camaraderie.

The hop bines grew up strings attached to high poles held taut by wirework. Men on stilts would hook the bines down.  The pickers would work seated around hop bins which were made of canvass and supported with wooden frames.

Oasts were used for drying hops which was something of an art form given that overdrying could ruin a day’s crop. The freshly picked hops would be laid and raked onto a drying floor with a furnace stoked below.  Once the drying was successfully completed the hops were cooled on a platform below the cowls which aerated them. Once cooled they were then swept into an enormous sack or hop pocket with the grower’s name on it and pressed in often by a manually operated press.

Eventually the whole process became largely mechanised with machines stripping the bines. Most of the workforce was reduced to picking out any chaff and odd leaves which had eluded the machine’s path into the rubbish pile.

By the late 20th century many small growers had been squeezed out by a quota system which meant the amount of hops they could sell became fewer and fewer each year.   It was the larger enterprises that survived.