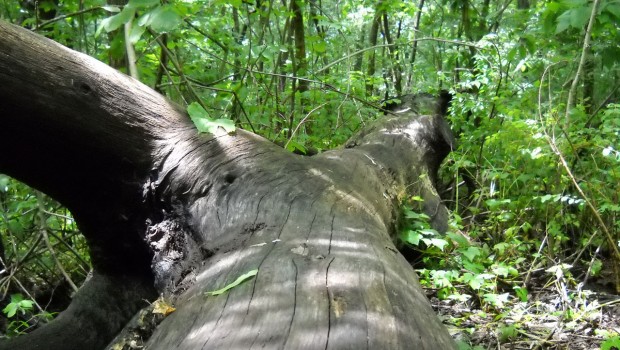 I mentioned last month that it was the time of the year when we should expect stormy weather but I did not expect quite what we got. Because we have been actively managing the woodland over the last twenty years, we got away relatively lightly. Even so a number of trees, mainly birches, came down and a quite a few trees suffered broken branches. A few paths were temporarily blocked but everything was pretty much back to normal in a few days. The most serious incident involved a badly damaged oak at Denny Bottom on Rusthall Common which was left hanging over the road with several telephone lines underneath it. Just to complete the fun, the road was already in chaos because of a new gas main currently being installed along its length. The gas engineers had to abandon the site until we could clear it and there was only just enough room between the excavations to position the cherry picker that we needed.

Hopefully we are into a quieter period of weather now, which will allow us to get on with this year’s clearance work. We will be starting on Tunbridge Wells with the opening up of a vista across the Lower Cricket Pitch, before we move on to Rusthall in the weeks before Christmas to open a new path from the bottom of the steps that come down from the Tarry Path, through the woodland to Rusthall Rd near its junction with Sunnyside Rd. If it stays dry enough or if we get frosty weather, we will also be putting in a new hard surface on the path leading to the Marlpit Ponds on Rusthall Common. This path gets very difficult and muddy during the winter and hopefully this work will alleviate the problem.

Back over on Tunbridge Wells, we will be carrying out some more seeding on the wildflower sites adjacent to London Rd. We will scarify the sites with a chain harrow to open up the sward and then sow Yellow Rattle, Cowslip and Devils Bit Scabious seed. If we can get the Yellow Rattle established it should be quite beneficial; not only is it a useful plant for invertebrates but also because it parasitizes grass, reducing its potential to out-compete the wildflowers we are trying to encourage. It is important to get the seed sown now as Yellow Rattle and Cowslip seeds need to overwinter on cold wet ground in order to germinate in the spring. If I have any money left at the end of the financial year, we will probably add some more wildflower plugs as well.