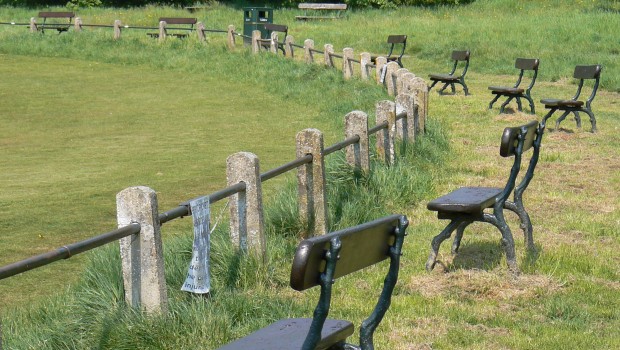 I ended last months piece with a wish for a warmer second half of the year, and at the moment my wish seems to be granted. As I write this, Murray has just won Wimbledon and the Ashes are just about to get underway; everybody seems to be smiling and the weather is fabulous. But; there is always a but, the combination of moist soil and lots of sun has caused a maelstrom of growth. We are already having to bring in the big collector flail to clear paths and rides, something we would not normally do for another month and the small flail is struggling to keep up with paths and sight lines.

One of the first tasks for the big machine was to clear the long grass in front of Edgcumbe Rock. In a change from the last few years, we had decided to take the Britain in Bloom judges there this year instead of Wellington Rocks, to see a different part of the Common. We have carried out a lot of work in recent years to expose the rock outcrops there and encourage open grassland instead of the sycamore scrub and bramble that was in front of the rocks previously. To our dismay however, when we started to cut the grass, we revealed a substantial area where what appears to be raw sewage is seeping through the ground. At the moment, all we have been able to do is fence the affected area off whilst we try and sort out what is happening. It must be a broken foul drain and logic would suggest that it must be coming from the nearby houses and hotel, but whatever we find, it is not going to be somewhere we want to be judged on in the next few weeks. Some of you may remember that we had a similar incident at Happy Valley a few years ago which, even with the complete co-operation of the property owners involved, took months to resolve, as we were kept waiting through wrangling between water companies and insurers. Anyway, in the meantime it is back to Wellington Rocks and then the Victoria Grove for Bloom judging.

The good weather has been perfect to get on with renovating some of our benches. We have refurbished eleven benches across the Commons and Linden Park Cricket Club have very kindly repainted the seats immediately around their ground. The Club has moved up a league this year and it seems to have generated a fair amount of interest, with good numbers of spectators using the benches. It is a lovely setting for a game on a Summers day.

The school holidays are about to start, and that usually means more work for our excellent litter clearer Brian. The next months will also be busy ones for our grass cutting contractors; please bear with us if it takes a little time to reach your area of the Common.