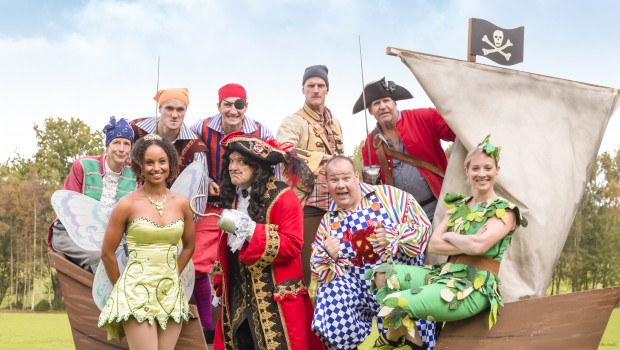 This year’s panto stars Mark Moraghan known to millions for his portrayal of Owen Davis in the medical drama television series, Holby City, and more recently as the narrator of much-loved children’s TV show Thomas The Tank Engine.He has also appeared in series such as Brookside, Heartbeat and Celebrity Master Chef. This year he will play the dastardly villain Captain Hook in a production once again staged by the world’s largest pantomime producer, UK Productions.
Joining mark in Neverland will be presenter, Gemma Hunt as Tinker Bell. She regularly hosted CBBC’s live coverage at Wimbledon, and appeared in Chucklevision and the Cbeebies pantomime.
The show promises magical family entertainment for the festive season – what would Christmas be without pantomime? Especially one full of pirates, fairies, flying scenes, and great music. We guarantee you’ll be hooked by the magical kingdom of Neverland!