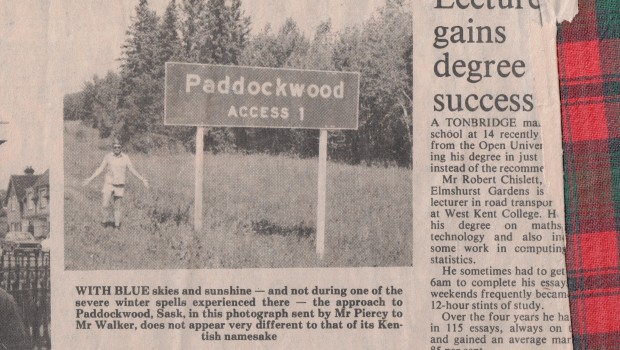 Many North American place names owe their origin to migrants from the UK who wished to preserve a link with the country of their birth.  The community of Paddockwood in Saskatchewan, Canada, is one such, having been founded in 1912 by Mr Fred Pitts and named by him in honour of his wife.

Frederick Stephen Pitts was born at Bicker, Lincs, in 1866.  In 1885 he was a railway platelayer living in Paddock Wood where he met his future wife Frances.  Frances, who was born in the hamlet of Queen Street, Paddock Wood, in late 1870, was the daughter of Augustus and Frances Roff and spent much of her childhood in a cottage at Rhoden Farm.

After their marriage the couple lived in Edenbridge where they had five daughters.  In 1905 they decided to leave England and join a growing number of emigrants to Canada, where opportunities to develop the land were being actively encouraged by the Canadian government.  On 9 March of that year the Pitts sailed from Liverpool to Canada on the SS Tunisian.  They settled initially in Ontario province but in the summer of 1911 they moved west to Saskatchewan, into an area then thickly covered in native bush.  Cordwood (wood cut into lengths so that it can be stacked in cords) at that time was the economic mainstay of the area but as the area was gradually cleared crops were planted and cattle were introduced.

The Pitts settled into a self-built log cabin but Fred soon realised that what was really needed in their remote area was a reliable postal system.   Distances between farms were vast, transport was poor and support services were few and far between. Accordingly he set up a post office, collecting letters and parcels on horseback for residents of the settlement.  He named his base Paddock Wood after his wife’s home town although the story goes that because the plank bearing the name was too short to incorporate two separate words, it became Paddockwood.  The post office itself was formally established on 1 January 1913.  The photograph below shows the post office building as it was in 1982.

The Pitts’ connection with Paddockwood was relatively short-lived.  When war broke out in Europe in 1914Fred, although almost 50, decided to go and fight alongside other colonials. Lowering his age by five years he joined the 15th Reserve Battalion of the Saskatchewan Regiment and, leaving his wife in charge of the post office, got as far as the Canadian base at Shorncliffe in Folkestone before succumbing to pneumonia in spring 1916without ever reaching the trenches. He is buried in the Canadian section of Folkestone’s Commonwealth war graves cemetery.  His widow Frances stayed on as postmistress for another year, then moved away to Vancouver where she died in 1952 aged 83.

Paddockwood has a particular claim to fame in that the first Red Cross outpost hospital in the British Empire was established there in 1920.  It continued until its closure in 1949.

Today, Paddockwood Saskatchewan is an established community with its own elected Reeve (Mayor), six Councillors and three administrative support staff.  It has council offices located in the former village school, and its own Church.  Paddockwood is located on the fringe of the Saskatchewan prairie approximately 40 kms north of the city of Prince Albert, on the edge of the Northern Provincial Forest, an area bounded by lakes and forests which provide excellent hunting and fishing.  There is accommodation for senior citizens incorporated into a coffee shop, a grocery store which also houses the post office and a Credit Union.  Paddockwood belongs to the Saskatchewan Provincial Constituency of Saskatchewan Rivers and the Federal Electoral District of Prince Albert.

The present population of Paddockwood village is 163 but the Rural Municipality of Paddockwood, which extends over 2456 square kms, has a population close to 1000.  67% of the residents are married couples and there are 74 private dwellings within the community.  A book called “Cordwood and Courage 1911-1982”, which goes into great detail about the history of Paddockwood, particularly its Great War service, was published at the end of 1982 and at the same time a silver spoon was specially struck to commemorate the setting up of the Red Cross outpost hospital at Paddockwood in 1920.

In October 1982 a visit was paid to Paddock Wood by Mr Stewart Piercy and his wife Evelyn from Paddockwood, Saskatchewan.  This was inspired by the emigration of Fred Pitts and his family to Canada nearly 80 years previously.  A special trip was made to Copt Grove (opposite Paddock Wood cemetery) where Fred Pitts apparently lived before his marriage to Frances Roff.   Before returning to Canada Mr Piercey handed over a souvenir baseball hat bearing the logo of Paddockwood Credit Union (pictured opposite) followed later by a copy of the book “Cordwood and Courage” and the commemorative silver spoon mentioned above.

Perhaps appropriately, the name Paddock Wood has also been bestowed on Saskatchewan’s first micro brewery.  Located in Saskatoon, the Paddock Wood Brewing Company was established in 1995 as a mail order brewing supply business providing grain, yeast and other brewing supplies to the homebrewing market.   The company’s founder, Steve Cavan, was a lover of British beer and made an initial approach to Paddock Wood, Kent, hoping to buy hops directly from local cooperatives.  However the smallest order they would accept was for 1,000 pounds, far greater than the five pounds he required at that time.  He eventually found a US supplier which enabled his business to take off.

In 2004 the Brewing Company became a licensed microbrewery.  Since then it has gone from strength to strength,turning out popular beers including bitters which include Kent Goldings hops in the mix. The microbrewery continues to supply kits for home brewers keen to capture the taste of old English ales and as can be seen from the illustration opposite, features Kent oast houses on its logo.

By John and Meryl Flashman.

With acknowledgements to the late Jack Walker, the Kent and Sussex Courier and Naomi Hrischuk of Paddockwood, Saskatchewan.  Photographs courtesy of Paddock Wood Heritage.