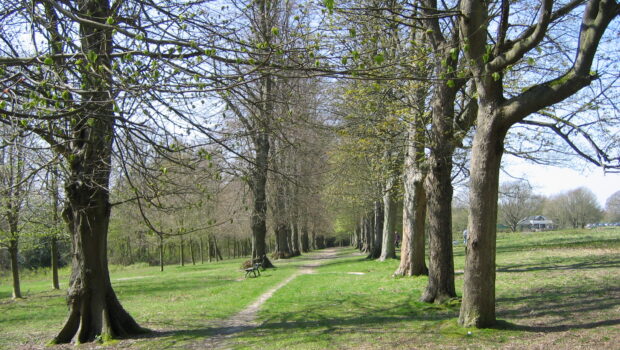 We just about squeaked home with all our clearance work before the end of February, although there is still a bit of chipping to be done before we can relax and let the birds nest in peace.

The situation was not helped by the arrival of Storm Eunice in the middle of February, which caused considerable damage. Mostly it was only relatively minor trees that came down and we were able to re-open the great majority of footpaths within a couple of days. As ever, it was predominantly Birch trees that were affected but we did lose a few major trees as well, the most prominent being the large, triple stemmed Oak that came down by Brighton Lake and partially blocked the A26 for a while. Nothing had been visible above ground but after the storm, it was clear that the root system of the tree had been infected with a rotting fungus for some time. The road was quickly re-opened and we made the rest of the tree safe in the ensuing days but the wreckage of the tree had to stay there until contractors were able to chip the branches and remove the trunks, which we will use to reinforce the Commons verges in vulnerable areas. Hopefully that will be the last of the storms for this year but that is by no means certain.

The Volunteers have also now finished cutting and clearing but the litter group will continue under Gemma’s guidance. The final conservation task was the clearance of a few footpaths restricted by fallen branches and the removal of self-sown seedlings from the grassland near the Tarry Path Pond. It was nice to see quite a bit of frog spawn in the pond already. As I write this, Fir Tree Pond, Cabbage Stalk Lane Pond and the new Marlpit ponds also have frog spawn in them and Toads are gathering in Brighton Lake; I have not seen any newts yet but they will surely not be far behind.

As the seasons change again, our focus moves to the renovation of our infrastructure, such as benches, bins and surfaced paths. Within the next couple of weeks, we will of course also be starting to cut the amenity grass areas and so the whole cycle of work starts again.

Although there is always plenty to do, the next few months are traditionally my quietest time of the year and the time that I get to watch the Common re-awaken. This year will of course be my last as Warden, so I intend to absolutely enjoy it to the full and savour every minute of it. My successor has now been appointed and will take up the post of Commons Ranger at the start of June. I will retire as Warden at the end of June after a month’s handover period. I am not entirely sure why the title of my post is changing from Warden to Ranger but it would seem to mean that I will remain the first and only Warden of the Commons, which is rather a fun thought!