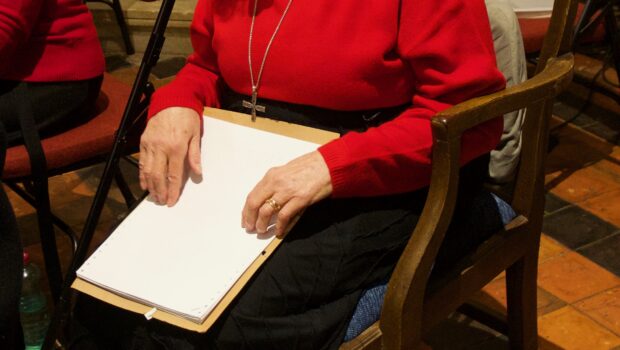 Helen sings the alto chorus part in major choral works to performance standard. She and the Choral Society are currently working on the theatrical Requiem by Guiseppe Verdi for a concert at the RTW Assembly Hall Theatre on 10 April. The Requiem Mass – from the composer of operas such as Rigoletto, La Traviata and Aida – is often regarded as more operatic than religious in style, better suited to concert hall than church. It is a challenge for all members of the Choir to perfect; but for Helen, it is even more difficult.

“As everyone else collects their scores at the first rehearsal of a new work, I think how easy it is for them. I have to source my own music in Braille.”

Braille is a tactile means of reading for the blind in the form of raised dots in patterns that represent letters of the alphabet. Not only the pitch of each note, but sharps, flats, rests and other details are represented by sets of letters. Helen’s fingers move over the thick cream sheets of her score as rapidly as the sighted read the written word, feeling words with her left hand and music with her right.

“Go to page 193,” announces Music Director Robyn Sevastos at rehearsal, but the page numbers in Helen’s score don’t match. She can’t watch the conductor for the signs to start singing, and for the beat, which keeps the choir singing in time and together.

“I need to remember the sound and patterns of the whole work, she said.

She also relies on her acute hearing, and “my counting has to be spot on, too.”

“The upside is that when I sing, I am not blind at all, I’m just the same as everyone else. Singing gives me a wonderful sense of freedom, like being able to run without fear of knocking into everything.”

After graduating in English from St Hilda’s College, Oxford, Helen went to into teaching – at Cheltenham Ladies’ College, and later at TWGGS (Tunbridge Wells Girls’ Grammar School, where she was introduced to the RTW Choral Society by members of staff. Later, she studied for a Diploma in Theology and was ordained, serving at St John’s Church in Amherst Road, Tunbridge Wells, where the Choral Society has long rehearsed. She worked in other parishes for 35 years, before returning to Tunbridge Wells on retirement, and rejoining RTWCS.