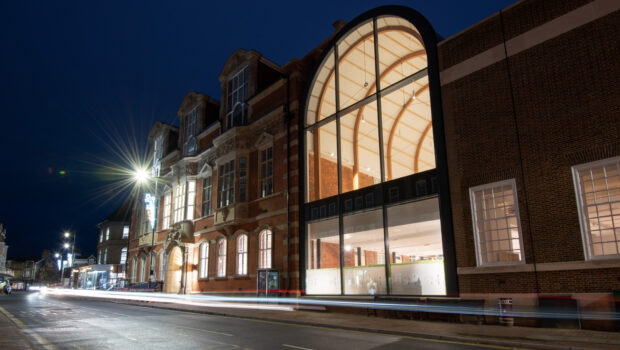 The Amelia Scott Opens on 28 April

There’s a new vibrancy to central Royal Tunbridge Wells and a new name for the library and museum which have been hidden behind hoardings for much of the past three years. Now called The Amelia Scott, this is a cultural centre at the heart of the town, and it opens on 28 April.

In the first half of the twentieth century Amelia Scott would have been a familiar name to many, and not just locally, as she was an activist and campaigner for women’s suffrage. She was one of the first women elected to the local council. As a councillor she championed municipal services which rather fittingly included a museum and library.

The £21million Amelia Scott project, was developed by Tunbridge Wells Borough Council with Kent County Council (KCC). Funded by both councils and the National Lottery Heritage Fund and Arts Council England, the project brings together a range of services and cultural offerings under one roof. Inside you’ll find museum spaces, new galleries, and a new adult library and a children’s library all alongside the tourism information and council services that were provided by the Tunbridge Wells Gateway. The building now seamlessly incorporates KCC’s adult education service where anything from arts and crafts to languages and IT can be studied.

The café looks out to the new Courtyard Garden and is one of several large-scale artworks specially commissioned for The Amelia Scott. Like the garden all seven artworks have been inspired by the people and history of Tunbridge Wells.

Around 450,000 people will visit the centre annually and they will be able to view many of the artefacts and artworks which have been in storage for years due to lack of space in the old museum.

A new gallery space means more opportunities for temporary exhibitions, starting with Henry Moore’s Threads of Influence which is on until 3 July. Then just in time for the school summer holidays is Cabaret Mechanical Marvels, an exhibition featuring modern automata with intricate mechanisms and humorous scenes. Containing hands-on interactives, this is fun for the whole family.

The Tunbridge Wells Literary Festival for readers and writers will celebrate the opening of The Amelia Scott over four days from 29 April to 2 May. Headlining the programme for this exciting new festival are David Baddiel and Jo Brand, both well known as presenters, comedians and writers. The creative space and the new libraries in The Amelia Scott make it the perfect place for this new festival to establish its roots. As well as established names the festival will showcase new talent and local writers across the four-day extravaganza of words, workshops, readings, panel discussions, poetry and much more.

Other venues will also host events as part of the festival including the Assembly Hall Theatre, Trinity Theatre, The Forum and The Tunbridge Wells Hotel.

The Amelia After Dark promises a late-night programme which will let visitors experience The Amelia Scott outside its usual opening hours, with talk of the events including stand-up comedy, art workshops and master classes and some family activities too. The Amelia After Dark’s first event is Hearts, Arts and Drag Queens on 6 May, which organisers say is an exciting, vibrant and unconventional celebration of popular and flamboyant culture.

The Amelia Scott is open seven days a week. For further information go to theamelia.co.uk.