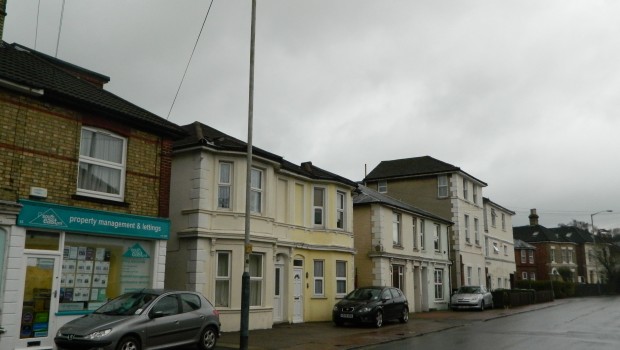 JB’s music store at 108/110 St James’ Road has been closed for a while now, with their new shop
well established on St John’s Road. Work recently started at St James’ Road to turn the building into
flats, with off-road parking. Living just round the corner, it has been interesting to watch the work
take place. I went to take some photos and the workmen told me the store was originally a Co-op.
This lead to a discussion with a neighbour about both local shops and off road parking. Because as
we lose all the old, local shops to residential buildings, we need cars and car parking spaces to drive
to the new food shops… While our one remaining local convenience store does sell enough things to
survive on, possibly with a supermarket delivery top-up, most people have a car for work, shopping
or leisure. Living in Victorian streets, we are very short of space to then park these cars, especially
as new homes are being built.
Even when we moved to the St James’ area eighteen years ago we had many more shops here.
Along St James’ Road there was a butcher, hairdresser, Post Office and a curtain shop. Underground
Sounds was at 108/110 St James Road while in Albion Road we had a newsagents, JB’s Music
Store, the launderette, which is still there, and the very useful Levett & Martin, still there. Opposite
Rochdale Road, on St James’ Road was, and still is, our local convenience store. This is a very well
established shop, in 1886 it was “ Rochdale House” owned by Edwin W Scragg, a grocer & beer
retailer.
A look through “Kelly’s Directory” in Tunbridge Wells reference library reveals a large quantity of
shops as this area was being developed. “Kelly’s Directory” is similar to a phone book, before
phones! Arranged both by street names, and commercial businesses, a list of everyone in the town,
with a few adverts thrown in, and very useful for both town and family history research.
I would need a whole magazine to list the shops we had in 1886, but some of the more interesting
are these. In Albion Road one of the shops in the row was “St James Bazaar” run by Mrs E Whiting,
as a ‘stationer and fancy repository’. In Auckland Road two general shops, a baker, and a
greengrocer.. who was also a bailiff. I would love a photo of the buildings where the flats now stand
on St James’ Rd between Rochdale Rd and Vernon Rd, seven shops including a ‘toy and fancy
warehouse’ , but at this time 108/110 St James’ Rd wasn’t built and seems to be just bare land. A
further nine shops were in the row from opposite “The Mitre” pub towards Albion Road. On the
road bend stood The “Cyprus Stores” beer retailer and general shop, now recently restored as a
house – with the Cyprus tree logos in the window.
I thought possibly, by 1916 and World War One, there could be less local shops, but most of them
are still there. At the end of Quarry Road we have “Walter Tookey, Borough Fire Brigade, hose cart
station no 5”… I enquired of local fire expert, Roger Lewis, about hose carts, which sound quite
interesting. Based all around the town, as sub-stations, these were manually propelled carts that one
man would have pushed, while running, to the fire. No doubt when the motor driven fire engines
were introduced in 1933 there were some grateful firemen!
The first mention of the Co-Op is in 1926 when no 108/110 is taken by “Tunbridge Wells Cooperative
Soc. Ltd.” The first co-operative group was founded in Rochdale, Lancs, in 1844. Their
first self service shop was in 1942, so the St James’ branch would still have been staffed by
assistants serving customers, but a much larger shop than those surrounding it. As the Co-op shares
it’s profits according to purchases, this was probably a good reason to visit the shop, but all the
existing shops in St James’ Road continued to trade. The real impact on the small shops seems to
have occurred during the 1950s…
The next big change to the road is the opening in 1934 of “Kay Aitch” Millinery and hosiery shop,
on the corner of Lower Albion Road and St James’ Road (now Alexander House). Owned by Mrs R.
Hemsley, the shop continued to expand during the years, selling a wide range of clothing, including
school uniforms. The block of shops alongside were still fully occupied in 1974, the last directory
in the library. The shops by Rochdale Road did not fare so well, the first block of flats are built in
the mid fifties, and the second block in the sixties.
As for The Co-op, in 1948 it is “Brighton Equitable Co-operative Society Ltd”, then in 1965 it
becomes a house furnishing and electrical domestic appliance shop for “Kay Aitch”. It was then
“Underground Sounds” before being bought by “JBs Music Store”, who moved from their smaller
shop in Albion Road. Our local post-office was converted into flats about the same time as “JBs”
moved to St Johns Road; blocks of lock-up garages are demolished and houses built; in December
the old corrugated iron Scout Headquarters in Quarry Road went up for sale… So the area is still
developing, with housing squeezed into every tiny space, and most people needing a car….