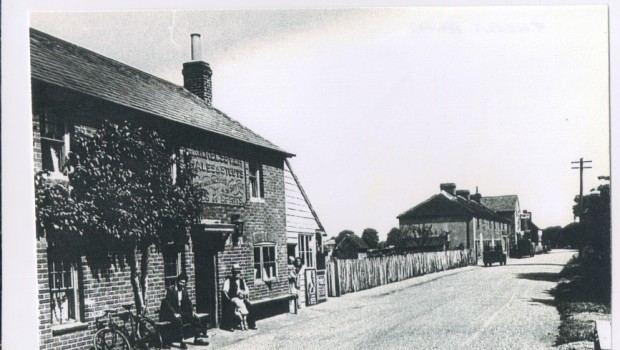 The Lost Pubs around Paddock Wood: Part One

In an earlier Town Crier article entitled “The Hostelries of Paddock Wood” we pledged to write an article covering the public houses on the outskirts of Paddock Wood which no longer exist. As the season of good will and the Christmas spirit (!) is now upon us it seems appropriate to delve into the archives and recall some of those former ale houses which in their day were there to attract the custom of local residents, passing travellers and the casual hop picker.
Starting with the area known as Queen Street, the New Inn was situated on the boundary with Yalding parish. The 19th century census entries state that the inn was actually in Yalding in the area known as Fowl(e) Hall. In fact, the beer stored in the cellar was drawn in Yalding and drunk in Paddock Wood (then a part of Brenchley parish). When it first began trading is not known but the house itself was built in 1797. In 1841 the licensee was John Pope who held the licence until the mid-1860s after which landlords came and went on a regular basis, one of whom, Arrow Smeed, licensee in 1890, would surely have been a contender for the title of Britain’s oddest named publican. The pub changed its name to the Kent Arms in 1947 following the re-naming of the Kent Arms in Paddock Wood to the John Brunt VC. In the 1950s trade consisted almost entirely of local land workers and, during the season, hop pickers. Because it was located some way from the prying eyes of the law, after-hours drinking appears to have been a regular occurrence, the pub remaining open until the last customer had departed. Dwindling trade caused the pub to close in January 1996. It is now a private house called The Old Inn.
Further along the road towards Paddock Wood was the Freemasons Arms. In the 1841 census the pub was listed as the Kings Arms and the landlord was Henry Barden but sometime prior to 1851 the pub must have changed its name to the Freemasons Arms as that is how it is described in the census of that year. Henry Barden remained as landlord until 1871 when his widow Susannah took over the tenancy. She in turn was succeeded by her son John who remained there until the mid-1880s when the tenancy passed to George Collins. He must have had a liking for the area as he continued as landlord until the mid-1920s. The last recorded landlord of the Freemasons Arms was Alf Parker who took over in the 1950s and was noted for the frequency with which he ran out of beer, hardly a recommendation in itself. Like other pubs in the area the landlord would not trust the seasonal hop pickers with glasses so a charge was levied which was returned when the glass was handed back. The pub closed sometime around 1980 and is now a private house.
The next pub on our journey through Queen Street was the Queen’s Head, the landlord of which in 1841 was John Cheesman. He was still there in 1851 by which time, and for some unknown reason, the name was changed to the King’s Head. In the census of 1861 there is no mention of the pub as such but perhaps the enumerator was an avid teetotaller as according to him there were no licensed houses whatsoever in Queen Street! But by 1871 the inn had reverted to its earlier name of the Queen’s Head, the then landlord being James Hobbs. A succession of landlords followed over the years but by 1922 the licence passed to the Haffenden family who ran the pub until well after the second world war. The Queen’s Head finally closed most probably in the late 1970s or early 1980s and is now a private house called “The Haven”.
Moving on from Queen Street and proceeding towards Brenchley the thirsty traveller would first encounter the Elm Tree Inn (now happily a thriving concern once again) and then find himself at the Mile Oak Inn near Catts Place. Between 1841 and 1851 the pub licensee was William Feaver but by 1861 it was Edward Field. How long he remained landlord is not known but in 1871 the premises were run by Harry Curd who remained mine host until sometime after 1901 when Edwin Ongley took over the licence. The inn changed hands again in 1922 when William Woodgate became landlord. His widow Doris was still running the pub in 1938. This inn was very small and had a somewhat unconventional layout consisting of one room. The last licensee of the Mile Oak Inn was Mr Len Sloman who, being afflicted with a club foot which limited his ability to stand, sat on the stairs at the back and served the customers from a tiny bar. Towards the end of the evening’s business he would on occasion cause a large jug of ale to be brought up from the cellar and then retire to bed, placing a bowl by the bar into which the die-hard regulars placed their money! The inn closed in 1980 and is now a private house.
There are several other former public houses in and around the area of Paddock Wood such as the Walnut Tree at Matfield, the Chequers at Five Oak Green and the Blue Bell at Beltring each of which has its own tale to tell.