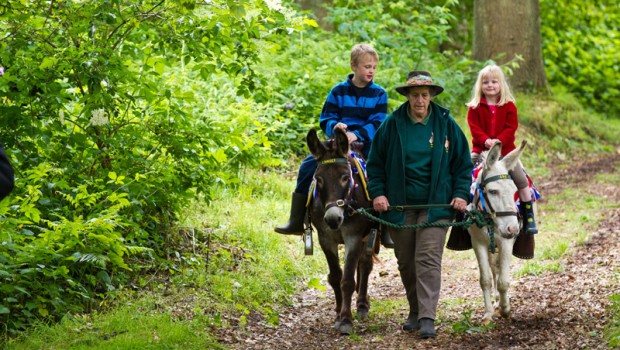 We have re-painted the benches around the Upper Cricket Pitch with plans to renovate another fifteen across the Commons. The tree we planted to mark the Royal Visit at the end of May is thriving thanks to all the recent rain.

Thankfully, there was a dry break for the lighting of the Jubilee Beacon; it was lovely to see so many people there, all seemingly having a great time. The Lower Cricket Pitch is a wonderful space for such events and to judge from old postcards of the Commons, it has always been a popular assembly point for the Town on special occasions.

The Mt Egdcumbe Hotel, which re-opened just before the Jubilee weekend, provided donkey rides around the Common on the Monday, something which was very popular in the early days of the Common; in fact Mt Edgcumbe Rd was always known as the Donkey Stand or Donkey Drive, as this was where the donkeys waited for hire.

Tunbridge Wells was one of the first towns to popularise donkey rides, well before they spread to our coastal towns; in fact there is a special Tunbridge Wells word for the riders of the donkeys, they were known as assinurians. The kids I saw on the donkeys probably did not know their historical significance but they certainly seemed to be enjoying the experience.

Assuming some kind of normality with the next few months weather, we should manage to catch up with ourselves and finish the maintenance works. Then before we know it, it will be time to get ready to cut our hay meadows and paths; then after that we will be preparing to de-silt Brighton Lake.

Image courtesy of Anke at anke.blogs.com