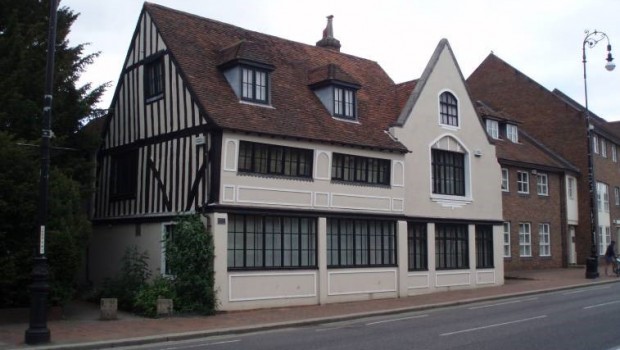 The Austens in West Kent

For the fifth consecutive year we are celebrating Jane Austen’s Birthday in Tonbridge with an address by Professor Fiona Stafford titled ‘All the Best Gifts’ which makes particular reference to Emma.

Emma was published in December two hundred years’ ago. This will be held on Wednesday 16 December at St. Peter & St Paul Tonbridge from 2.30pm-4,30pm. You can buy your tickets from Mr Books in Tonbridge and the Sevenoaks Bookshop. The event has a ticket price of £5 which includes the address and tea and homemade cake.

Jane Austen and her family had really strong links with Kent. She made frequent visits to her brother Edward, who lived near Canterbury, but it was in west Kent that her father’s family had its roots. A visit to Horsmonden reveals that the church contains Austen tombs, while several houses associated with Jane’s cloth-making ancestors survive in the village.

Jane’s great-grandmother, Elizabeth Weller, came from a well-known Tonbridge family and married John Austen from Horsmonden in 1693. When he died unexpectedly a decade later he left her with heavy debts and seven children. A resourceful and far-sighted woman, she took up the post of housekeeper to the headmaster of Sevenoaks School, thereby ensuring a free education for her children. Of these, William, Jane’s grandfather, became a surgeon in Tonbridge where he married and had a family, which included Jane’s father, George. William’s early death, at the age of 37, is recorded on his grave in Tonbridge church.

Thanks to the generosity of today’s American Jane Austen Society, the church now has an interesting display of Austen information in its foyer, which is open to the public every weekday morning from 10 until noon.

In Sevenoaks High Street you can still see the elegant Georgian Red House
where Jane visited her great-uncle Francis, whose status was that of a wealthy lawyer. His kindly concern for his nephew, George, albeit an orphan, had enabled her father to receive an excellent education at Tonbridge School.

The town of Tonbridge was mentioned by Jane in her unfinished novel, ‘Sanditon’. So was Tunbridge Wells and in Woodbury Park Cemetery lies the grave of her brother, Henry, who played a pivotal role in getting her novels published. It was Henry’s widow, Eleanor, who outlived her husband in Tunbridge Wells and once owned Jane’s ring, which has been the subject of much recent interest.

With so much interest in ancestry these days, we should perhaps remind ourselves of the importance of West Kent in shaping the family of one of England’s best loved novelists. The admirable character qualities and fine education of Jane’s ancestors contributed much towards her own unique achievement.
A walk has been mapped around the Austen-related areas in Tonbridge: On the following web-address you can find a downloadable walk leaflet and recordings which you can listen to on your phone, tablet or other internet enabled device: one about the Church memorials and one about the walk itself
http:/www.tmbc.gov.uk/services/leisure-and-culture/events
scroll down to Jane Austen’s Connections to Tonbridge