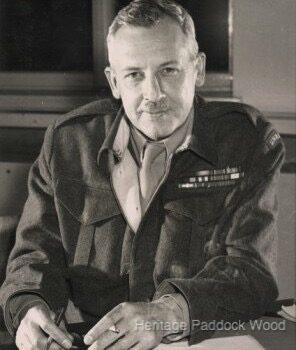 From June 1869 until 1923 the Horrocks and Morgan families were at the centre of the community in Paddock Wood. Village events were held on the grounds of their property and members of the families took an active part in village affairs.

The ‘Great War’ or WW1 (1914-1918) was during their period of ownership and many will know of their iconic house Mascalls.

Mascalls is therefore the birthplace and childhood home of one of the most notable and important figures of WW2.

Sir Frederick’s father, Captain Beverley Morgan, ran the Paddock Wood Local Volunteer Reserve (1914-1918).This was equivalent to the Home Guard of WW2. He had married Clara Horrocks, daughter of Mary Elizabeth Horrocks who died in 1899 aged 71.

Mary Horrocks is buried in Paddock Wood and a Parochial Hall was built in her memory on the site behind the War Memorial. The building was demolished in 1967 poignantly during the same year as Sir Frederick, her grandson, died in Northwood Middlesex.

General Sir Frederick Morgan ‘Freddy’ was responsible for Operation Overlord, in other words he masterminded the D Day landings of WW2 (1939-1945) which secured the outcome of the war. The operation commenced on 6th June 1944.

Sir Winston Churchill named Sir Frederick as leader of the British and American war team having worked in great secret preparing a plan for the invasion of Normandy. Churchill paid tribute to this work, work that began long before General Eisenhower was appointed Supreme Commander of the Allied Forces in Dec 1943.

Morgan’s plan had been approved in August 1943 at the Quebec conference. General Eisenhower awarded Sir Frederick the Legion of Merit in 1945.

Sir Frederick wrote a book about his work and the invasion titled Overture to Overlord, (1950). In it he states: “Sound opinion is not the exclusive prerogative of those who are paid to give it”

During 1943 and early 1944, along with an assistant, he had visited at least one Marylebone hotel where he started debates about sending an attack across the Channel. Sir Frederick wanted to know what others were thinking.

It was not until 1950 that the people whose ideas he had explored realised who they had been talking to!

“Overture to Overlord is a must for the serious military historian. Nobody knows how much we owe Freddy Morgan. One of those outstanding British officers who seemed to fall through the historical cracks – little has been written about him and one finds even fewer references to his wonderful book”

In a published letter to General Morgan after the war John Bull wrote:

“In this welter of praise and publicity the people of this country rarely hear your name mentioned. I don’t suppose one man in a hundred knows who you are or what you have done. Yet, it was your plan that made possible the glorious victories that carried allied armour across Western Europe, which made possible the liberation of Paris & Brussels and millions of people who for years had lived in the shadow of tyranny. Eisenhower may go down as the Liberator but history will record you as the man who made Liberation possible”

Mascalls, the beautiful house where Sir Frederick and members of his family were born was lovingly restored in more recent years. It stands today’s as a monument to the important history and unique significance of those who have lived there.