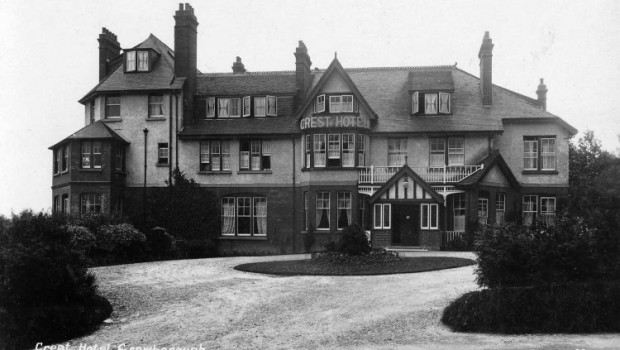 When Alfred Chilton built The Crest Hotel in Crowborough, he probably did not realise he was constructing a hotel that would outlast all the others in the town.

Chilton had already made his mark in Uckfield by creating one half of the High Street, but Crowborough’s hotel business was far more competitive. Twelve hotels were built overall to take advantage of Crowborough’s newfound reputation as ‘Scotland in Sussex’ and the new Beacon Golf Club.

Indeed, the 100-bedroom Beacon Hotel was the finest in Crowborough and, initially, The Crest played a quieter role, catering mainly for older visitors. However, by the 1920s, the Automobile Association was ranking them as the top two places to stay in the town and The Crest’s hard work was paying off.

The Crest, situated on Beacon Road, had a good reputation from the start. Lady Churchill stayed there in 1909 during the early stages of her marriage to the future Prime Minister, Winston Churchill. Subsequent steady management meant the hotel maintained its reputation, while others began to falter during the forties and fifties. It also managed to attract big names to entertain its guests, including the Barron Knights and the Searchers.

Crucially, The Beacon Hotel was unceremoniously demolished in 1956. About this time, Crowborough was experiencing a decline in visitors and many of the other hotels closed. Consequently, more and more local organisations relied on The Crest and it hosted Crowborough’s Rotary Club for over 20 years. When the Country House Hotel in Croft Road closed, the Round Table joined The Crest and the hotel then served its community by hosting the Chamber Of Commerce’s annual dinner.

Improvements were made which saw the hotel through the next few years but, unfortunately, the decline in visitors that had claimed The Beacon finally caught up with The Crest, now renamed Winston Manor, in accordance with its link to the Churchills.

Successive management teams still kept very high standards, but the reduction in bookings was inexorable. Then, in 1999, the supermarket ‘Safeway’ applied to demolish the building and utilise the land in a new plan to regenerate the town centre. Public opinion was against destroying the old hotel and Safeway retreated. That year, Eclipse Hotels bought Winston Manor, but the signs did not look positive: both the hotel’s restaurant and leisure centre were closed. Then, only a year later, the building was closed down and used to house the homeless. This was quickly stopped after Police and public concerns and, in 2001, Safeway sidestepped the hurdles it has previously met by buying the hotel themselves.

If Alfred Chilton could not guess he would build the last standing hotel in Crowborough all those years ago, he certainly could not have known how the final chapter would play out. On Burns Night, 2002, Winston Manor burnt to the ground in the biggest fire Crowborough had seen for over a century. Eighty firemen from eight stations fought the fire, but to no avail. The magnificent Crest had lost its final battle.