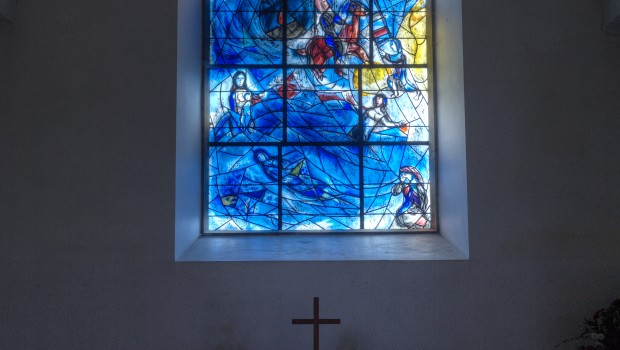 During the summer of 1961 Lady d’Avigdor-Goldsmid of Somerhill and her eldest daughter  Sarah Venetia, enjoyed a visit to a Chagall exhibition in Paris. Tragically during September 1963, at the age of 21, Sarah was drowned in a sailing accident near the coast of Rye.

Family and friends subscribed to the restoration of the interior of Tudeley Church and Marc Chagall was commissioned to design a window in her memory.

“For me a stained glass window is a transparent partition between my heart and the heart of the world. Stained glass has to be serious and passionate. It is something elevating and exhilarating. It has to live through the perception of light.”

Marc Chagall (1887-1985) a pioneer of modern art, was one of the most successful artists of the twentieth century

From humble beginnings he went on to establish himself in the sophisticated world of modernistic elegance and artistic life of the times.

Chagall’s talent lay in the ability to reflect experiences of suffering and tragedy as simple and symbolic images to which many could respond.

“I feel as if colours and lines flow like tears from my eyes, though I do not weep” Marc Chagall 1962

Marc was born in 1887 as Moishe Shagal, in a place called Liozna, near Vitebsk which was part of the Russian empire. About half the population were Jewish and Chagall was the eldest of nine children. His father, Khatskl (Zakhar) Shagal was employed by a fish merchant, and his mother, Feige-Ite, sold groceries from their home. Like so many at the time they worked hard. His father carried heavy barrels for only 20 roubles a month (approx 40p!).

Chagall included fish motifs in his work out of respect for his father and wrote of those early years:

“Day after day, winter and summer, at six o’clock in the morning, my father got up and went off to the synagogue. There he said his usual prayer for some dead man or other. On his return he made ready the samovar, drank some tea and went to work. Hellish work, the work of a galley-slave. Why try to hide it? How tell about it? No word will ever ease my father’s lot… There was always plenty of butter and cheese on our table. Buttered bread, like an eternal symbol, was never out of my childish hands.”

Whilst their backgrounds were poles apart, Chagall’s beautiful work to the memory of Sarah  d’Avigdor-Goldsmid might have evoked for him, not only the tragedy of her early death but his own symbolic link to water through that ‘hellish work’ of his father.

Marc Chagall was an early modernist and created his own style in virtually every artistic medium, including painting, book illustrations, stained glass, stage sets, ceramic, tapestries and prints. He travelled between cities of Europe and then between 1914 and 1945, like many contemporaries, he was embroiled within the horrors of world wars, revolution, ethnic persecution, murder and exile of millions of people. Some of Chagall’s art therefore could be understood as the response to a situation that has long marked the history of Russian, as well as other Jews.

In spite of many being cultural innovators making important contributions to society, Jewish people were frequently considered outsiders in a hostile society.

Modernism describes changes, said to arise from society in the late 19th and early 20th centuries as a fully industrialised world emerged with the rapid growth of cities before the horrors of World War one (1914-1918). It encompassed activities of those who believed traditional forms of art and daily life were becoming outdated in the newly emerging industrialized world

Stained glass was one of his major contributions to art was but it did not happen until 1956, when Chagall was nearly 70 years old. Glass allowed the expression of his intense and fresh colours with the benefit of natural light and interacting refraction. His first major project was to design windows for the church at Assy. From 1958 to 1960, he created windows for the cathedrals of Reims , Metz, and the famous Jerusalem Windows of Israel.

As stated on their website, All Saints’ Tudeley is the only church in the world to have all its twelve windows decorated by Chagall. At the dedication of the first window Chagall said that, were it not for the 19th century glass in the chancel, he would be happy to do the church in its entirety. During the next 15 years, Chagall designed the remaining windows, again made in collaboration with the glassworker Charles Marq in his workshop at Reims in northern France.

Tudeley now has Chagall glass in every window.

During the 1950s Pablo Picasso was said to remark “When Matisse dies, (which he did in 1954), “Chagall will be the only painter left who understands what colour really is”.