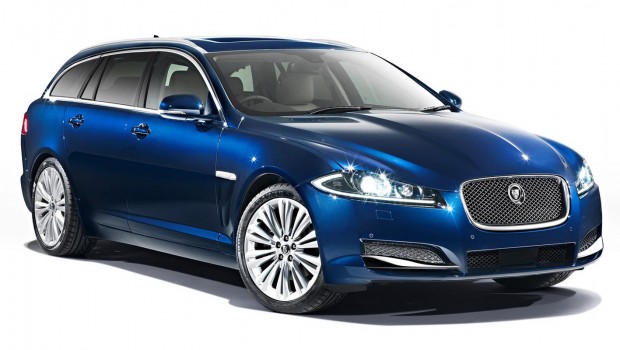 When the Jaguar XF was first launched nearly five years ago I remember being really excited. It’s predecessor, the S Type, was old fashioned when it first appeared and went downhill from there, only briefly lifted by the introduction of the twin turbo V6 diesel that Jeremy Clarkson rated so highly. The XF was a gem with svelte styling, class leading ride and handling and the kind of luxurious interior that makes you feel special every time you sit in it. When I spoke to the man from Jaguar, the first thing I asked was when the estate version was going to arrive. He replied that there were no plans to produce an estate and I was puzzled by this; over a third of Audi A6s for instance are sold in estate form. In effect, Jaguar would be ruling out a large chunk of their potential customers. Jaguar have finally realised this for themselves and responded with the XF Sportbrake.

For quite a few executive cars the estate variant is actually better looking than the saloon, but I wouldn’t say this is the case for the XF; the deeply curved roofline of the saloon looks great – so much so that Jaguar marketed it as a four door coupe along the lines of the Mercedes CLK. Even so, the Sportbrake is a nice looking car with a roofline that curves down towards the tail, an effect that is exaggerated by the line of the rear side windows. From the front it looks just like the saloon, sleek and faintly menacing… lovely!

Climb inside and it is just the same as the saloon and that is altogether a good thing. The wood and leather is everywhere and provides a sense of deep luxury while the wow factor is provided by the pulsating start button and cylindrical gear shift that rises out of the centre console when you fire her up. Alright, some of the plastics are a bit tacky and the ergonomics are “individual”, but who cares? In the back the saloon’s Achilles heel of restricted headroom has been eradicated but the transmission tunnel makes it uncomfortable for centre passengers. The Sportbrake is what is known as a lifestyle estate; there is a similar amount of boot space to a BMW 5 Series Touring but it is not a serious load-lugger and the curving roofline restricts practicality.

At the moment the Sportback is only available with diesel power; you can choose from a 2.2 litre with 160 or 200bhp or a 3.0 litre V6 with 240 or 270bhp. The smaller engine is a modified version of the one found in a Ford Mondeo and is too harsh and inflexible compared to the ones offered by Audi and BMW, but the V6 is a different kettle of fish. I drove the 240bhp version and it is very refined and delivers all the performance you’ll ever need, 0-60 in 6.7 seconds with a top whack of 150mph. The ride and handling are just the same as in the saloon, excellent. The ride is velvet smooth under virtually any conditions and the handling is as good as it gets for a two tonne estate car.

The XF is competitively priced, unless you go for the ultra-luxurious Portfolio specification, and comes with all the kit you could reasonably need as standard. I’d definitely recommend stumping up the extra £1000 or so for the lower powered V6 diesel. For a car that was never designed to be an estate, the engineers have done a commendable job; the ride, handling and refinement have not been affected in any significant way while the practicality has been enhanced. I’d be lying if I said this is a better car than an Audi A6 Avant or a BMW 5 Series Touring but, in this guise, it is certainly no worse. At the end of the day, it possesses something neither of those cars can boast: charm, character and a hint of good old British charisma.