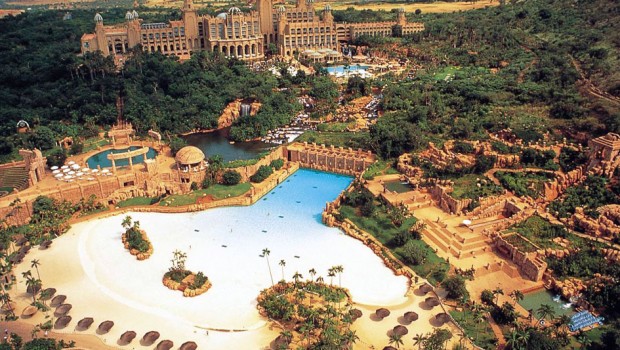 February… it’s a bleak month in the middle of winter enlivened only by Valentine’s Day and my birthday. Whenever I can, I try to take a holiday in somewhere hot in February and, as this year was my 30th birthday, I decided to really push the boat out. I’ve done a couple of the cheaper Caribbean islands but I’ve never been to Africa at all, so a trip to Sun City near Johannesburg in South Africa made perfect sense. I went with Emma, my girlfriend, and it cost us about £1400 each, quite a lot but, hey, you’re only 30 once.

Sun City is supposed to be the South African version of Las Vegas because it has a big casino and some huge extravagant hotels, but it’s much more than that. Las Vegas is all about gambling, eating out and watching shows; in Sun City there’s lots to do during the day as well. Getting there in the first place is a major event; the flight takes 13 hours and there’s a two hour transfer at the other end, but there’s no jet lag involved which makes it bearable. February is high summer in South Africa so you’re rewarded with blazing sunshine and temperatures in the mid-thirties when you get off the plane.

Sun City is in the high veldt and in the summer it is practically a desert but, somehow, they’ve managed to create a tropical rain forest in a valley. There’s also a manmade lake so it’s a bit like being on a Caribbean island. We stayed in the famous Palace of the LostCity which is truly spectacular and far and away the best hotel I’ve ever stayed in. It really does look like a lost city rising out of the jungle and it’s surrounded by amazing gardens – taking a walk after lunch is like going on a jungle safari but without the snakes and bugs. The restaurant is world class, truly the best steak I’ve ever eaten, and even the basic rooms are luxurious. Better still, the hotel has its own water park, the Valley of the Waves, which is said to be the best in Africa. The wave pool generates waves that are seven feet high, need I say more!

We went to the casino on a couple of evenings; it’s very big with lots of tables and slots and has a good buzz about it, but mostly we just went out for a meal and a few drinks. The reason for this is that we were completely shattered from all the stuff we did during the day. As well as the water park, we visited the lake which has a nice beach and all the water sports you could wish for; I had a slightly drunken blast on a jet ski – great fun! The resort also has two championship standard golf courses, so I hired some clubs and played a round of the very impressive Sun City course; Emma didn’t join me on this excursion. A few miles away from Sun City lies the Pilansberg Game Reserve. Apparently, it’s not quite in the same league as KrugerNational Park, but it’s the only safari I’ve ever been on and I was well impressed. We rented a car for the day and drove ourselves round, rather than taking an organised tour, and we saw elephants, lions, giraffes and a lot of ostriches which come a bit too close for comfort.

For me, the best activity was a ride on the awesome Zip 2000. This is the world’s longest zip wire; it is 2000 meters long and has a vertical drop of 280 meters. Obviously, you don’t just hang on to a pulley and hope for the best; they strap you into a harness and you are suspended horizontally so you effectively go down the ride head first. They even strap a fin to your ankles to keep you stable as you hurtle along at 75mph – it’s massively exhilarating.

Sun City, it’s as much fun as you can have with your trousers on.