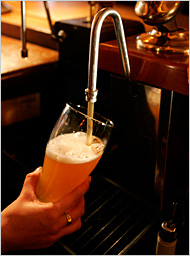 It might seem surprising that in 1840 there were about 50,000 brewers in the UK. This number was approximately halved however before 1918, and the end of WW1 (World War One) after high tax on beer affected demand.

In Friedrick’s Gazetteer of 1875, 6,591 breweries are listed across the country. Of these 120 were within 55 of the towns and villages of Kent.

Records show that Maidstone had eight, Tunbridge Wells five while Sevenoaks and Tonbridge had three. Thirteen places including Hadlow, Lamberhurst, Wateringbury,Westerham and Wrotham had only two breweries. Those with just one included Aylesford, Cranbrook, Edenbridge, Hawkhurst,  Southborough, Tenterden, West Malling and Yalding.

The river Medway was navigable for barges in 1740 and coal as well as other commodities used for the brewing industry could be transported to and fro. The beer was exported out by the same mode of transport. The process was changed after 1844 when the railway from Paddock Wood to Maidstone opened and took over much of the river traffic.

Similar to the world today, circumstances continued to change and in 1901 when Sir Charles Igglesden arrived on a visit to Yalding, he wrote of his disappointment:

“ to find that the local brewery was standing idle since a big firm came along, purchased it and closed it down as rival. I remember Yalding beer, delicious and pungent not so long ago” (Saunters through Kent with pen and ink , 1901.)

The breweries relied on locally grown hops used to flavour the beer, as well as to add some preservative qualities. William Cobett describes the landscape in 1823.

“From Maidstone to Mereworth is about seven miles and these are the finest even miles that I have seen in all England. The Medway is on your left with its meadows about a mile wide. There were hop gardens on both sides of the road. Looking across the river you can see hop gardens and orchards two miles deep. There are orchards and woods of ash and chestnut which add to the beauty.”

Whilst hop pickers arrived for a few weeks of the year, farm workers remained to work the land day after day week after week and month after month throughout the year. They lived for the farm which served as their home.

Whitbread was one employer who seemed to make improvements to the accommodation for their employees. Baths and plumbing arrived for some in the 1930s and residents were also encouraged to look after their gardens, for which they were given a day off per week on a rota basis. There was no National Health Service in those days and workers were encouraged to join the District Nursing Association for 1/7d a quarter. An annual dinner was held for workers and their families

The following extract, written by Mr Waghorn, illustrates the routine for this time of year on Whitbread’s Hop Farm.

The weather throughout the month has on the whole been very favourable and so progress has been made with all outside work. Hop ploughing as finished last month and a good start has been made with ploughing back. Delivery of lump lime is now nearly finished and is being carted and spread on the gardens due to be treated this season (one ton per acre to a third of the acreage per year)

All gardens have received sulphate of potash. This fertiliser is not applied to induce quantity but to encourage development of the foliage and accentuate maturity at the proper time. The gardens have also had a dressing of steamed bone flour required to stimulate root development.

The rest of the work consisted of trimming hedges and the usual winter round, carting brushwood, trimming poplars, digging outside of gardens. The new cart shed behind the farm office is finished and work on the new tractor shed is being preceded with”

Roger Ralph formally of Little Rhoden Farm remembers weekly wages for agricultural workers of £9.10 in 1963, which rose to the princely sum of £10.10 by 1966.

It is 50 years since hops were hand-picked in the county, and the old hop-pickers who return in August and September each year for a nostalgic lungful of Humulus lupulus have to long and hard to find a hop garden. When lager became popular, most of the hop gardens were grubbed out. Of the 46,600 acres of hops that flourished in Kent in the 1870s, only 1,000 survive, producing a total harvest of just 30,000 hundredweight. The decline was precipitated from the 1960’s with cheaper hops from the United States, New Zealand and Germany.

However, we are now seeing a glimmer of resurgence. Many of hop ingredients have been nurtured developed and prepared by Botanix in a building still sited on the Hop Pocket Lane in Paddock Wood.

Long may it continue.

Acknowledgement of source and extracts from The Encircling Hop by Margaret Lawrence, 1990, SAWD