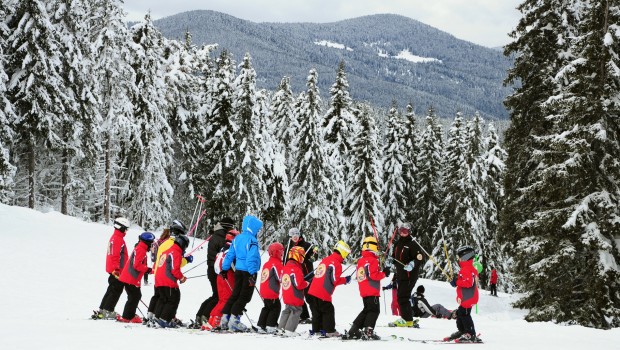 Budget skiing in Bulgaria – Cheap as chips and just as satisfying

The annual skiing trip to France or Italy used to be the highlight of our year but the arrival of two kids soon put paid to that. Moving to a part time job and childcare costs meant we simply couldn’t afford it. After seven skiing free years we couldn’t resist the lure of the snow any longer but the cost of a week in France would have meant giving up our summer holiday, an unacceptable sacrifice. Then I hit upon Bulgaria; I had heard of it as a destination for a dirt cheap beach holiday but I never knew you could go skiing there. It turns out that you can and a one week package including lessons and lift passes costs less than half a comparable trip to France.

We were staying in Borovets which is apparently the oldest ski resort in Bulgaria; the Tsar’s relatives were taking skiing holidays there in the 19th century. Of course, we all know what happened to the Tsar and that Bulgaria was an Eastern Bloc country until the 90s. It still feels like a Soviet resort today although there is a lot of new development going on. The hotel we stayed in was a good example of Soviet era hospitality, a huge foyer with the worst taste carpet I have ever seen, a vast restaurant that served completely inedible food and geriatric plumbing that clanked and gurgled and worked when it felt like it. On the plus side, our room was huge, too, with loads of space for the four of us and there were plenty of helpful friendly staff. There are masses of bars and restaurants in Borovets and they are all incredibly cheap so the inedible hotel food wasn’t really a problem.

Borovets is a long way south, level with Rome, so even though the highest slopes are above 2700 meters, decent snow isn’t always guaranteed. Luckily, the area was experiencing a Siberian winter when we arrived and there was more than enough snow at every level. They’ve opened quite a few new runs over the last few years and put in new lifts to service them. This can only be a good thing, the old lifts are positively geriatric and creak and groan their way up the mountain painfully slowly; breakdowns are not frequent but still happen too often and the queues are longer than I’d like. One top tip is to take one of the ever-present taxis half way up the mountain; it’s cheap, quick and you avoid all the queues, although it wasn’t always possible with all the snow we had. Once you are up there, the range of runs is perfectly adequate but limited compared to the standards of a western resort. One area where the Bulgarians really excel is in the quality of the skiing lessons; the instructors give lots of individual tuition and seem really pleased to have improved your technique. On the downside, within a few days the kids could ski better than I can.

A night out in Borovets is a lot of fun. There are plenty of places to eat and, while they hardly offer gourmet cuisine, you can get a filling and tasty meal for very little money. Happy hour is a more or less permanent fixture in most of the bars but, even if they don’t hand over two drinks for the price of one, drinks are still astonishingly cheap. It’s all very good natured but I can imagine it might get a little boisterous as the evening wears on. However, with two small children we were always back at the hotel by nine.

That’s Borovets, then; it’s cheap and cheerful, the locals are friendly and the vodka flows like water. The lifts are a disappointment, our hotel was the height of bad taste and there aren’t as many ski runs as you get in a Western European resort. But Borovets also has a quirky character that will put a smile on your face every time you visit. I’d definitely go again.