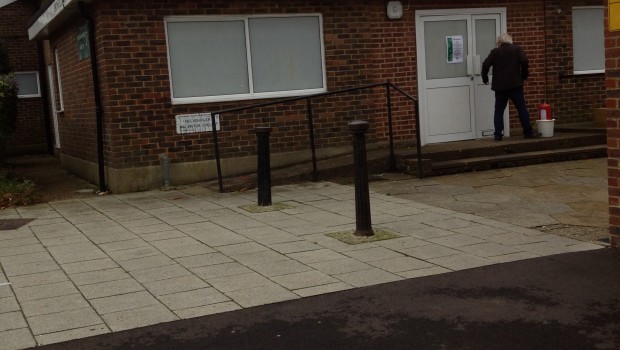 The Estate That Got Its Hall Back

How do you come to lose your village hall?
Older residents on the Showfields estate can remember that when the first council houses went up in the 1970s on the site of the former Tunbridge Wells Agricultural Showground there was a clear need for a community centre. The older Ramslye estate across the Eridge Road had just one small shop with a sub-post office. Showfields itself had nothing. There was talk of shops, a library and perhaps even a pub. Even more a feeling that the new residents needed a hall for local events, local groups, parties, weddings ….
And this is what they got. Locals contributed, the council got involved and – in parallel – the Number One Community Trust set up by the two local churches, St Marks and Broadmead, set up the local community centre comprising a café, a pre-school and a local library. Just across the way Showfields found itself with a large well equipped hall (with meeting rooms) at its heart.
And then somehow – back in the 80s -the hall fell on hard times and the council took over. Gym clubs and other groups from as far away as Paddock Wood became its full time occupants. Local residents got used to seeing large four-wheel drives delivering young people with track suits and boxing gloves but not being able to use the hall themselves.
Then – this Spring – everything changed.
The main group renting the hall closed down and the Trust, still running everything else in the community area, made its bid to take over the hall – now in a dilapidated state. After hard-fought negotiations with the council the Trust moved in at the beginning of May and an army of local people – from teenagers to eighty year olds set to work with ladders and paint brushes to deal with twenty five years of grime and neglect.
And this Summer the “new” Showfields Hall opened for business. By the end of November bookings from the estate and the town have begun to build up. There’ve been weddings receptions, childrens’ parties, meetings, boxing training and more….
But the Hall still needs more customers if it is to meet the tough financial conditions set by the council.
All enquiries and booking to Ritu at Number One Community Centre, 1 Rowan Tree Walk, TN2 3NR – phone 01892-514544.