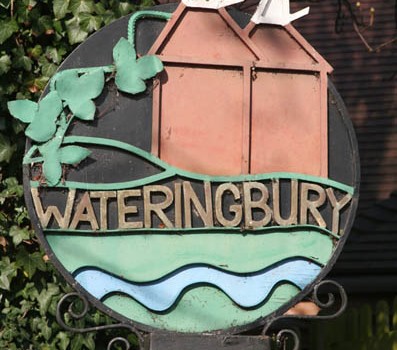 WATERINGBURY owes its favoured position on the south-facing west bank of the Medway to the fact that in earlier times the Medway was the main artery for the conveyance of timber, fruit, hops and other farm produce, most of which were grown in the very fertile soil of the area.

The arrival of the railway in the mid-1800’s provided Wateringbury with a delightful station which, with its manually operated signal box and level crossing, still serves the local community.

With the transfer of commercial traffic from the river to the railway, the Medway has attracted a wide range of pleasure craft, which enjoy meandering through the river valley along its navigable length from Rochester to Tonbridge.

In years gone by, there were three water mills situated on one of the chalk streams, which flow through the village on their way to the Medway, but now only one of these mills survives with its overshoot wheel.

The origin of the village name is thought to reflect not only the number of streams and waterfalls, which abound in the parish, but the gurgling, babbling sounds, which they emit.

Because of its proximity to London and the Channel coast, Wateringbury has over the years attracted a number of notabilities, including Sir Oliver Style, the former High Sheriff of London who in 1600, after dealing with the Gunpowder Plotters, retired and set up house in Wateringbury Place.

His descendant, Thomas Style, built the present magnificent mansion in 1709, set with several small lakes in hundreds of acres of farmland.

The parish council produced a village development plan, which showed that since the village had virtually doubled in size in the last 25 years further extension of the built-up area should be discouraged.

The local planning authority has supported this view in order to preserve Wateringbury as a rural village community.

About 20 years ago the parish council purchased a piece of land for use as a recreation ground. This has been developed by the Playing Fields’ Association and is used regularly by the cricket club and a football club.

There are several other fine buildings included in the conservation area, such as the Thatched House (formerly known as Swiss Cottage); The Beck, former home of Admiral Sir Henry Moore; Gransden, former home of Admiral Young; Pelican Farmhouse, a 15th century timber-framed house now used as offices by a local firm of architects; and Upper Mill, an award-winning develop¬ment of single-storey dwellings, built about 25 years ago.

The present population of Wateringbury is just under 2,000, and in past times the majority of workers (both men and women) were employed either on the local farms or in the breweries. 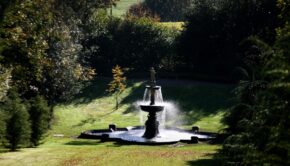 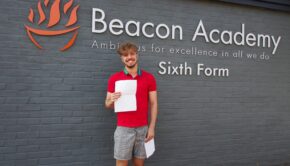 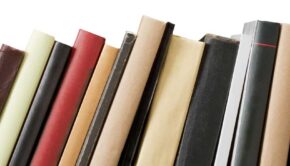 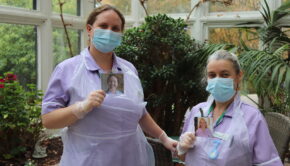